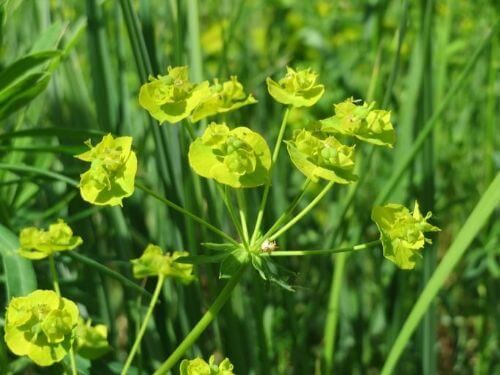 Leafy spurge is one of the most unwanted and unique invasive plant species. It is considered to be a threat to native biodiversity due to its rapid growth rate. According to recent reports, there were outlined millions of dollars in losses in the U.S. and Canada due to the high infestation rate of leafy spurge. In this article we will talk about how to control leafy spurge in your yard.

The weed is difficult to control due to its persistent nature and great regenerative ability (both sexually and vegetatively). There is a need to take strategic measures to completely manage and eradicate this aggressive invader, and to further cease its re-infestation in farmlands.

The plants emerges in early spring vegetatively through lateral roots and through seed reproduction. The deep taproots of leafy spurge act as a nutrient reserve and the lateral roots contain adventitious buds that have the capability to produce a new plant separated from the parent plant.

The leafy spurge plant can grow in a wide variety of environments. Finally the species is enlisted in the top 20 invasive plants list of Northwest Michigan due to its potential threat to the natural ecosystem.

Leafy spurge is native to Eurasia. In the 19th century, the weed was introduced accidentally in North America via contaminated seeds. The noxious weed was first collected in Massachusetts in 1827.

The leafy spurge is native to the temperate Asian and European regions and is currently found all across the world with the exception of New Zealand and Australia. Leafy spurge has become a serious problem in the U.S. and Canadian provinces. States with the largest leafy spurge infestation are Montana, North and South Dakota, Wyoming and Idaho. According to the State Noxious Weed Control Board, leafy spurge reduces 20 to 50% livestock capacity of rangelands and pastures, resulting in millions of dollars in losses each year. 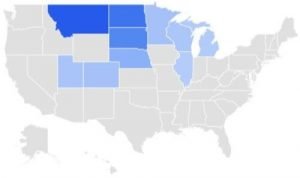 Reports of leafy spurge in the US

The invasive weed can grow in a wide range of habitats. Leafy spurge is found to be the most aggressive in semi-arid environments but also occurs in arid, subhumid, subtropic and even in subarctic areas.

Leafy spurge can flourish in a wide range of moist to dry soil conditions but most aggressive in coarse soil texture and less abundant in clay soils. The areas considered to be sensitive for leafy spurge infestation are pastures, railroad ballasts, roadsides, abandoned fields, prairies, woodlands, rangelands, waste sites, streams and ditches.

How to Identify Leafy Spurge

Leafy spurge is a herbaceous perennial weed up to 2-3.5 ft. tall. It has two types of extensive root systems: vertical taproots can penetrate up to 15 ft. in depth and adventitious roots can spread up to 35 ft. The buds present on lateral roots facilitate the new sprouts to flourish in undistributed areas. 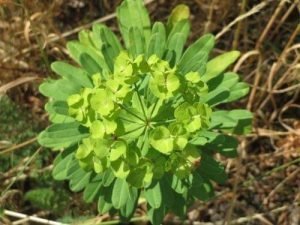 Leafy spurge from above

The stem is bluish-green, smooth, upright, thick, clustered above the ground and contains milky sap (released if the stem is broken). The dry stems can persist in the winter and following summer.

Leaves of leafy spurge are alternate, narrow, long, bluish-green, pointed, smooth-edged, lance-shaped 1-4 inch long. The leaves appear scale-like at the lower half of the stem and start to become more ovate and shorter towards the top of the stem. All the plant parts contain milky sap. The bluish-green stem turns to yellow or orange-red in late summer. 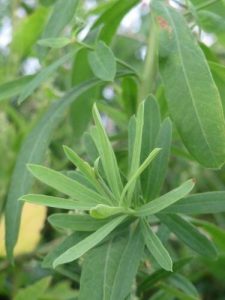 Leafy spurge contains small, inconspicuous green flowers (umbel) which are surrounded by paired, yellowish-green, heart-shaped, showy bracts. The flowers bloom from May to July. Pollination takes place by insects. The fruits of leafy spurge are brown in color. The grayish brown seeds disperse explosively (up to 15 ft.) upon maturation. Each plant produces 10-50 capsules containing 200-250 seeds, which can stay viable in the soil for up to 8 years. 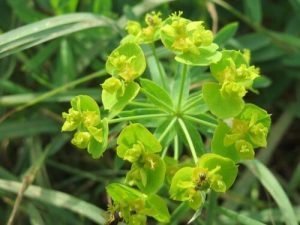 The Life Cycle of Leafy Spurge

Leafy spurge starts to emerge in early spring (mid-April to late May). The development of the clustered flowers start after 1 to 2 weeks of stem formation. Greenish-yellow bracts are produced in May. Flowering stops late June to mid-July, in the hotter part of the summer. However, if the conditions are favorable for the plant, leafy spurge can still produce lateral flowers throughout the summer and fall. Seeds get mature after 30 days (4-6 weeks) of pollination. The most favorable season for the germination is between late May to early June.

Leafy spurge has no food value and can cause health problems due to its poisonous nature. However, whole-plant biomass can be used as a fuel crop for heating homes.

The acrid sap of leafy spurge can be used externally to treat warts. However, European species are not recommended for medicinal use. Large doses of leafy spurge have a depressant effect on the heart and can even be fatal.

Leafy spurge contains milky latex in all parts of the plant that can cause swelling, blisters, irritation and blotching in sensitive individuals. After touching leafy spurge, do not rub your eyes without washing your hands thoroughly. The milky sap of this plant can be carcinogenic if handled frequently.

It can be problematic for wildlife creatures and animal livestock when present in pasture areas due to its poisonous nature. Toxins in leafy spurge can cause hair loss and inflammation on the legs of horses, whereas sheep and goats can graze a portion of leafy spurge without health issues.

Why is leafy spurge invasive?

How does Leafy Spurge Spread?

Leafy spurge is a creeping herbaceous weed, that reproduces vegetative (through root buds and root crowns) and by seed. During late summer and fall, seeds disperse up to 15 ft. around the parent plant. Root fragments also have the ability to reproduce into a new plant in favorable conditions.

Seeds of leafy spurge are covered by gel which can stick to animals and humans which also helps in dispersal. Water (maybe through flood) can also help to spread seeds in undistributed areas.

How to control leafy spurge?

Some weed eradication techniques such as fire and herbicide application can provide effective results if handled properly. The herbicides should be applied in June or mid-early September to maximize herbicide uptake. After eradication, monitor the site closely to control the reestablishment of leafy spurge.

Early detection and prevention of leafy spurge is paramount for cost-effective control of the weed. Because after establishment of the weed population, it is difficult to get rid of leafy spurge without using specific control methods.

Hand pulling or digging leafy spurge is effective in case of small infestations. After the first year of the establishment of leafy spurge, it will be difficult to control physically. Hand pulling should be done before seed dispersal, and complete plant parts should be removed to avoid re-sprouts. During hand pulling, wear gloves to avoid skin problems due to contact with the toxic plant sap. Follow additional treatments after hand pulling for complete removal of leafy spurge.

Mowing is a less effective technique to completely eradicate leafy spurge infestations. During growing season or prior to mid-July, mowing can be used to suppress seed production. It can be conducted with an interval of 2-4 weeks when the mature seeds and flowers of leafy spurge are not yet produced. Finally mowing should follow the chemical treatment with an interval of 3-5 weeks for effective results.

Controlled burning can be helpful to suppress the leafy spurge growth, and to reduce seedling viability. Burning when the wind blows will produce hotter fires and complete combustion.

In the infested sites, leafy spurge can be eradicated after 1-2 years of intensive cultivation with two to three weeks of interval. The process can reduce leafy spurge up to 90% in first practice and the remaining in the following season of practice.

Goats and sheep enjoy eating young leafy spurge whereas the weed can cause toxic effects on other animal livestock. Grazing should be conducted after the development of floral bracts on the leafy spurge. Continuous grazing over a 4 year period can reduce a leafy spurge infestation up to 90%.

Leafy spurge infestations can be significantly controlled by the application of the stem boring beetle (Oberea erythrocephala) and flea beetle (Apthona cyparissiae, A. flava, A. nigriscutis, A. lacertosa, and A. czwalinae). The stem boring larvae can feed on the root crown, stems and above-ground plant.

The flea beetles larvae will eat the root of leafy spurge in spring while adult beetles will feed on the flowers and foliage during late summer. The insect can be effective in specific habitats, therefore take note of habitat requirements before releasing them in the field.

Specific herbicides can be applied in an infested area to eradicate the leafy spurge. The application of herbicides is recommended in June (during flower or seed development) or in mid-September when the plant starts to uptake nutrients. Herbicide practice is considered to be the best one to control leafy spurge in the infested area.

The systemic herbicide glyphosate (e.g. Redeo®, Roundup®, Accord®) can be used to treat a moderate infestation of leafy spurge when seeds are developing in late summer or before frost in the fall. It can be used by adding vegetable oil on upland sites or by adding non-ionic surfactants on wetlands. Glyphosate can also affect the native plant species and may increase soil erosion.

2,4-D in combination with glyphosate (Roundup®) can be effective to control leafy spurge in the fall. The application of Picloram (Tordon® 22K) at any time of the growing season or Dicamba (Banvel®) in early summer or spring can also be effective to eradicate leafy spurge. The treatment must be repeated in the successive year to prevent re-establishment of the weed.

Treatment with Imazapic (like Plateau®) can produce effective results after application but it does not control the re-establishment of leafy spurge in the following season. Therefore, it requires additional treatment to completely eradicate the weed.

Follow the labels and guidelines before the application of herbicides. 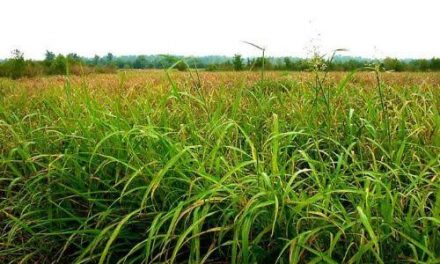 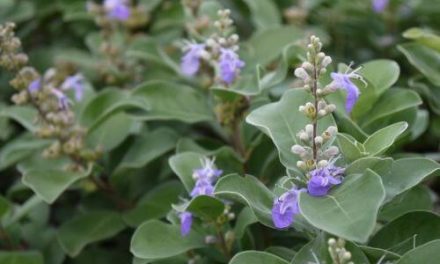 How To Remove Beach Vitex 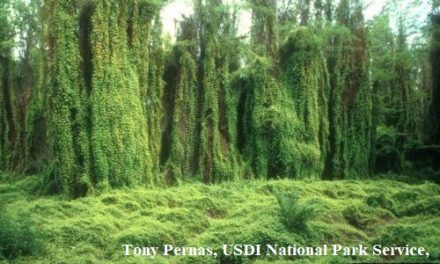 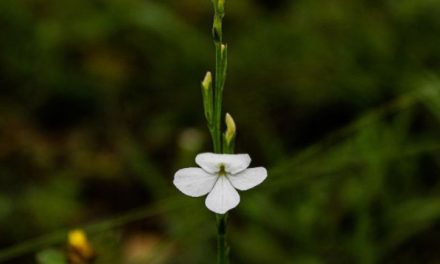 How To Control Witchweed