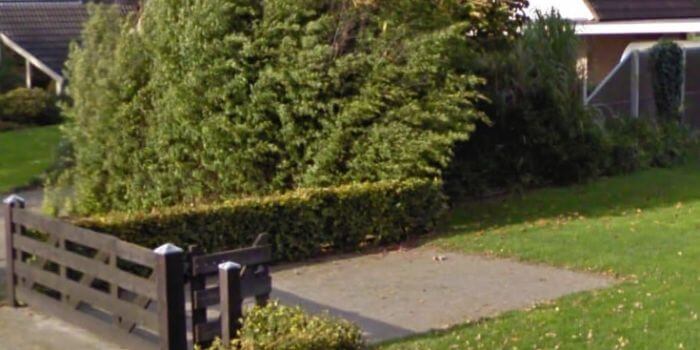 Hi, I’m Otto Olivier from the Netherlands. I am the founder and owner of P.L.I., a Netherlands based agency that specializes in online retail and marketing.
A few years ago I came into contact with invasive plants, and became interested in these persistent weeds. Afterwards I have studied a lot of invasive plants, and want to share this knowledge so that it can help others in their fight against invasive exotics in their garden. Without further delay, below you can read my first contact with invasives.

My first invasive garden project, that got me interested in invasive plants

Some time ago my wife and I moved to a beautiful house in the Netherlands. The previous occupants have always maintained the house and garden well, it all looked neat. Of course you want to make things to your own taste in a new house, and the garden was on the program for a make-over.

We came to live there in the fall, so the garden work would be in the next spring. Along the entire driveway stood a 10 ft (3 meter) wide bamboo hedge, about 35 ft (10 meter) long. I did not think much of it, it gave good privacy because you absolutely could not see through it. It had a tropical look, something you would only expect to see in warm countries.

The bamboo in my garden

After the winter we started working in the garden. After a harsh winter, the bamboo looked shabby, part hung limp and had brown discoloration. I also noticed that it was a perfect place for pests. Occasionally you could hear a mouse beeping and rustling between the bamboo. The bamboo was planted so close to each other that you could not walk through it, that’s why pests probably saw this as a safe place.

So we felt that the bamboo had to go, and put some native plants back in the place. I did not know much about bamboo, and thought ”I’ll take care of it”. No sooner said than done, I was ready for battle on my free Saturday morning with a shovel, chain saw and hedge trimmer by my side. I also bought an electric tiller/cultivator earlier that week at a garden center to break and turn the soil with roots after I had cut off the bamboo stalks.

To make the job go well and streamlined, I had ordered new plants from a grower the day before. These would come in place of the bamboo. A laurel hedge, a few holly and pampas grass. These new plants would be delivered on Monday so that we did not have to look at a bare plain for long.

I am completely prepared, I thought.

Full of enthusiasm I started on that Saturday morning early with the removal of the bamboo. Cutting off all bamboo stalks took a lot of time because the electric hedge trimmer often got stuck in the stiff thick bamboo. There were two types of bamboo, a lower species with thin stems, and a meters high (10+ ft) species with thick stems. You could make a nice fishing rod from the latter. I used the chainsaw for the thick type of bamboo. 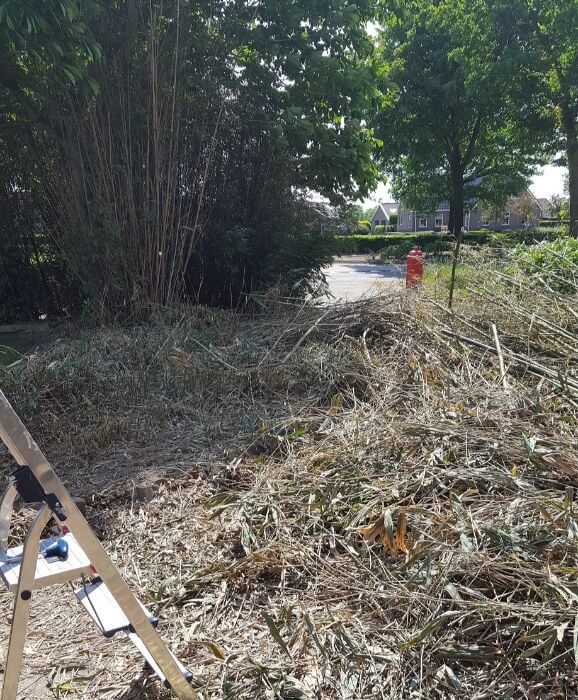 cutting down the bamboo plants

After hours of sawing, the end was in sight. I could finally look into the distance again, and just had to dig the ground for a while and turn the roots around with the garden tiller that I had bought. At that time I was already proud of the result. Full of joy I grabbed the garden tiller and plugged it in the extension cord.

I placed the garden tiller on the cut down bamboo surface and turned on the machine. In my mind I saw the satisfactory result already, I just had to shred the ground for a few minutes. But unfortunately, the garden tiller started to bounce on the stalks right away and did not get a grip on the ground. Okay I thought, then I pick up the spade and dig out a small piece by hand. Then the cultivator machine will be able to get a good grip in that part, and from there the rest. 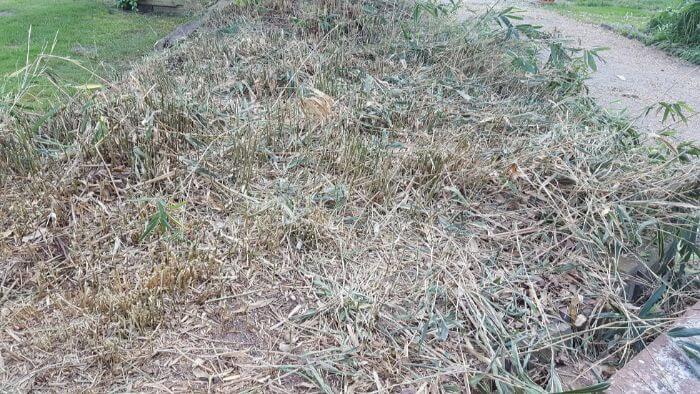 This remained after cutting down the stems

I am ready to break the ground with my spade and take a deep breath, to hit the ground with one hard whip. I sweep the spade to the ground and it ricochets. It sounded like i was beating on concrete. That moment I strongly suspected that this could become a difficult job. Anyway, I went to try again. I have a solid physique, and if I would jump with my 100 kilos (220 lb) on the spade it would go into the ground. Right?

What followed then must have looked funny. I jumped on the shovel several times as planned, but even the tip did not enter the ground. “Did the previous occupants pour concrete between the bamboo?” I asked myself sincerely. The color of the ground looked like it, light gray. After jumping a few times on the spade I came to the conclusion that this was not going to work.

On to the next plan to get this bamboo removed

I called my father if he had an idea to solve this, and perhaps he had better tools to break the ground with bamboo roots. Coincidentally he had passed by a few days ago and we talked about the bamboo removal. He said  that bamboo is probably not easy to remove. But stubborn that I was, I tried anyway.

Moments later my father was finally here, and went to admire the bamboo slaughterfield. At this moment the driveway was full of murdered bamboo stalks, you could hardly walk around. As my father said earlier, bamboo is firmly and deeply rooted.

We had come to the conclusion that this is not going to happen by ourselves, and that heavy force should be added. My father has a local gardener who prunes his trees every year. He happened to be working in the neighborhood, so he asked if he wanted to come watch the bamboo slaughterfield.

Not much later my father returned with the gardener. Like my father, he was quietly watching the bamboo havoc, after which he asked me: ”So, you thought you could dig this bamboo out with a spade?”. To which I answered bravely ”yes”. I suspect he laughed hard afterwards.

The gardener told me that he had removed bamboo from gardens a few times before, but now he does not want to do that anymore. It seems that some of his employees have ‘’broken’’ their backs on the plant. He also said that bamboo can become a hundred years old, and that at the end of its life it will drop seeds and then dies off. After which the seeds will provide new bamboo plants.

He also said that one of the two types of bamboo in my garden is an invasive bamboo, and that it is difficult to get rid of. It struck me already that many meters away from the bamboo forest, new small bamboo shoots popped from the ground, also between the stones of the driveway.

There was about 20 cubic meters (700 ft³) of bamboo shreds, which was then disposed of. Then we made a follow-up appointment for the removal of the roots. Because bamboo grows so deep, the soil had to be excavated at least half a meter (1.5 ft), according to the gardener. If you leave a piece of root, bamboo will grow again and spread fast. 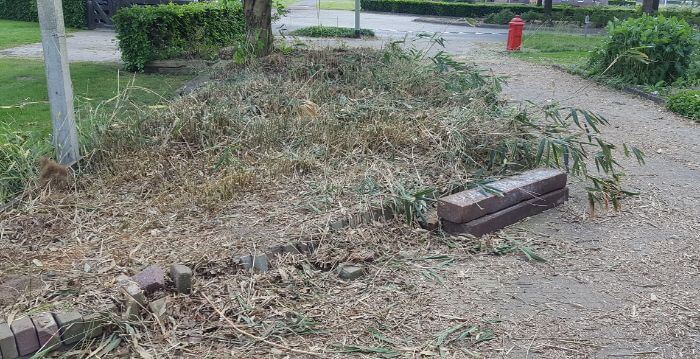 Let there be roots

The next day I woke up early by the sound of a big excavator, the heavy weapons had arrived! It was one of the heaviest excavators they had, because a small one would not cut through the bamboo roots and tip over. The excavator took a first bite out of the bamboo soil and it immediately became clear to me why I did not go through it with a shovel. It was one large placard of roots, about half a meter deep. 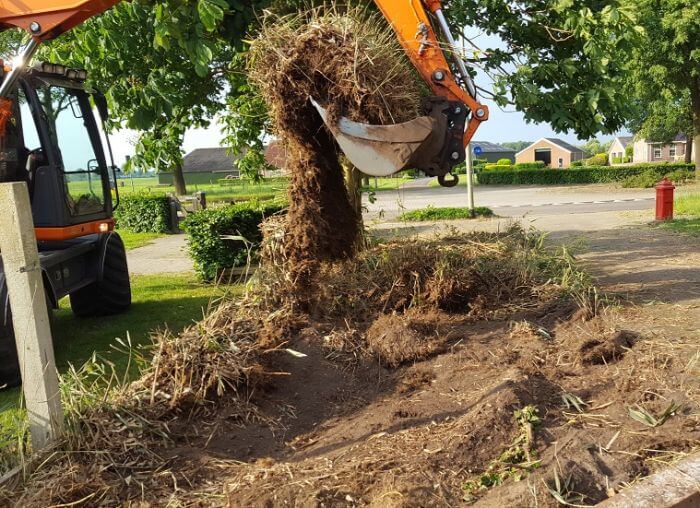 The bamboo roots came out like a big carpet

In the end two tippers (dump wagons) with soil and bamboo roots were excavated. Then there was a lot of hand-digging to remove the roots around corners and edges as much as possible. 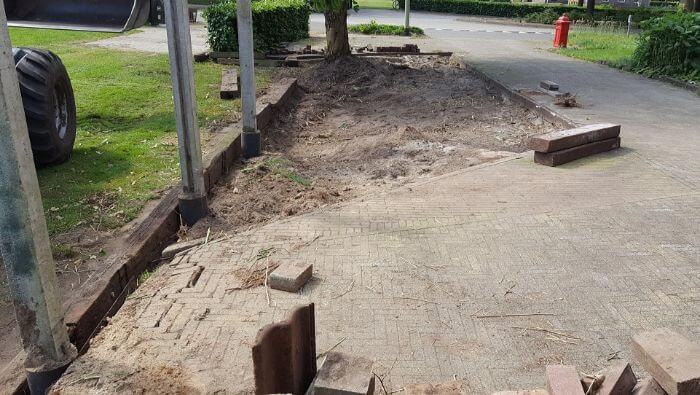 When, in our opinion, all the roots were removed, two tippers with fresh soil filled the hole back up. Then the fresh soil was raked flat and the job seemed to be done. I was very grateful for all the help, and I look back at it with a smile… I would never have been able to do this with shovel. 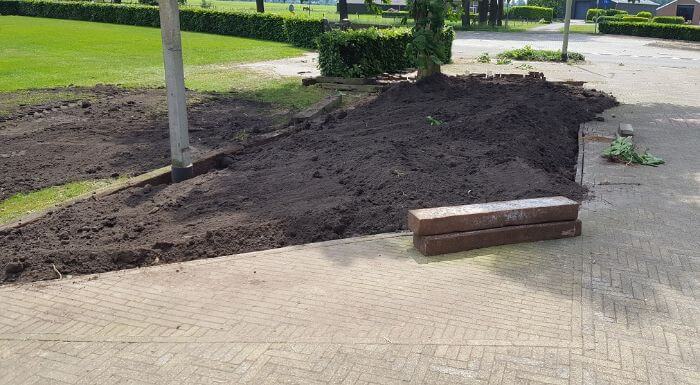 After the bamboo storm had settled, I put the new plants in the ground and it looks great. It looked as if the bamboo had been defeated and this chapter was finished.

But then it grew back

A few weeks later I walk with a filled watering can along the place where the bamboo plants stood. A few feet away I see something grow between the paving stones that looks like weeds. But after closer inspection, it turned out to be bamboo. I grab the leaves and pull it, but the stem breaks off between the paving stones. I left it there, and would keep an eye on it. Less than a week later I see three bamboo shoots in the same spot. 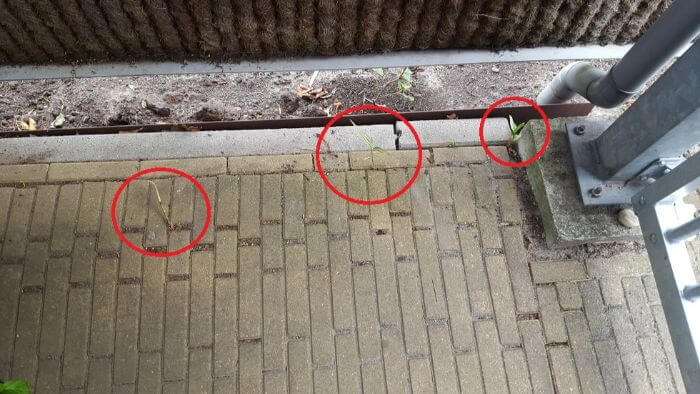 To prevent a new bamboo war, I removed the pavers between which the bamboo grew to dig out the roots. This turned out to be a big root, here you can see that bamboo is really an aggressively spreading plant. I have thrown the roots away and put the paves back. In this place I have not seen anything grow back, all roots have been removed well. 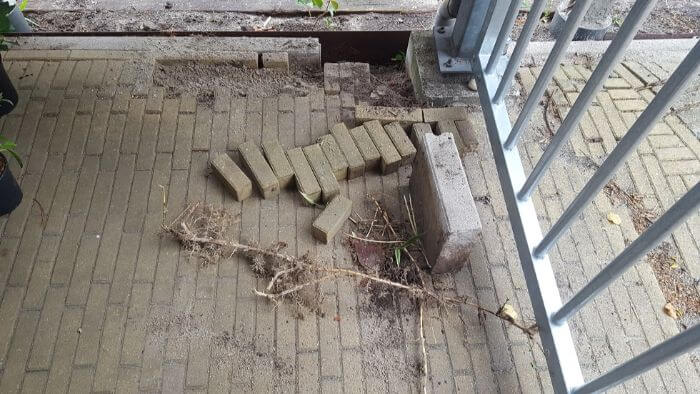 At the spot where the bamboo was removed and new plants were planted, there was a structural removal of weeds with a hoe every week for several months. When i skipped one week after months, I came across a weed that seemed familiar to me. Yes, it was the invasive bamboo again! 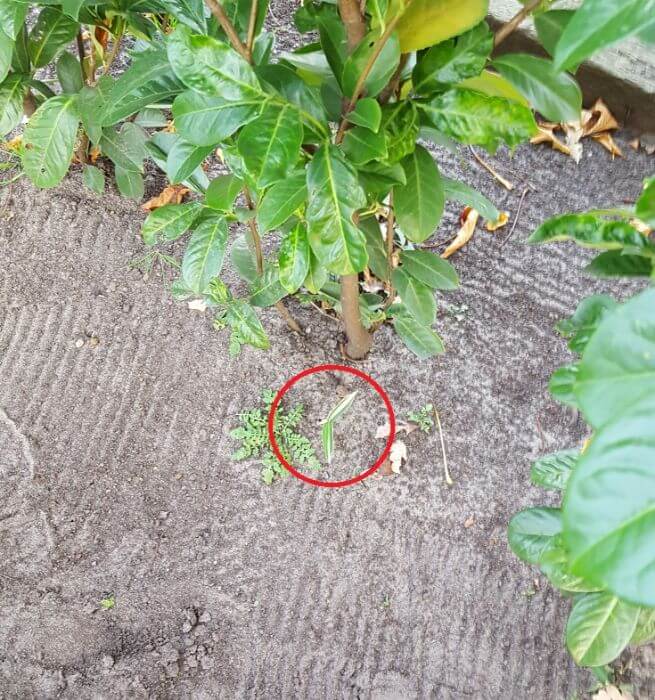 I tried to dig up the bamboo roots, but unfortunately the stem broke off halfway. This stem disappeared into the deep, under the root ball of the new plants. I have left it here, because I do not want to scoop out those new plants that are just beginning to grow nicely. Something tells me that I should have digged it out, time will tell. Whenever I spot bamboo shoots again, I dig out the entire area to remove the roots completely. I think that’s the best way to get rid of it.

Bamboo can look nice in your garden, but if you have planted an invasive bamboo species, you will eventually experience problems. It will grow to places where you do not want it, and the neighbors will not be happy that it will grow into their garden. Think carefully before you buy and plant bamboo in your garden.

This is my experience with bamboo so far, I can not say that I like the plant. forewarned is forearmed.