How To control Japanese Stiltgrass in Your Yard 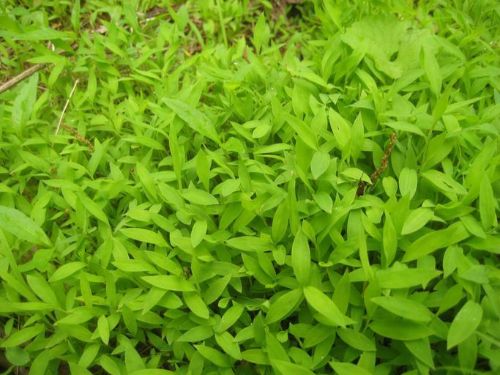 How to Identify Japanese Stiltgrass

Japanese Stiltgrass is an annual grass that is found in areas of Asia, including China, Japan, India, Malaysia, Korea, and the Caucasus Mountains. As an invasive plant, it has spread its native range to include surrounding Asian countries such as Turkey, Pakistan, and Nepal. The plant is considered an invasive species in many areas around the country, including North America, South America, Europe, Australia, Africa, and Oceania.

Japanese Stiltgrass is a bright but pale green grass, with a short, bamboo-like or lance-shaped blade. The leaf blade has silver hairs that run down the center of the blade that tend to be relatively reflective, running down the upper leaf surface. The grass can grow up to 2 to 3 feet tall, but it has a relatively weak and shallow root system.

The leaves of Japanese Stiltgrass are alternate, and you can find the leaves growing to between 1 and 3 inches long. While Stiltgrass has some resemblance to bamboo, the stems are thinner and more wiry, rather than being the sturdy stalk of bamboo. The stems can also be green, purple, or brown.

Japanese Stiltgrass produces slender flower spikes between August and early October that appear in pairs. After the flowers bloom, dry fruits are produced by the plant, which are yellow to red in color. Before dying back in the fall, the plants turn a purplish tinge. In heavily infested areas of Japanese Stiltgrass, the dieback of the plant creates a thick layer of tannish colored thatch. 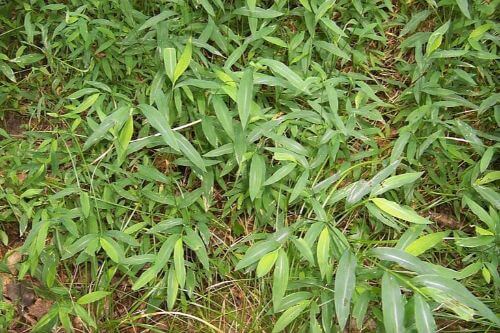 The roots of Japanese Stiltgrass appear at nodes that touch the ground. The plant elongates quickly during the months of fall, and the plant then produces seeds, which can stay viable in the soil for years to come, generally considered about 5 years. The grass then dies back during the fall when other grasses also start to die back. The seeds then germinate in the soil between late winter and early spring.

Japanese Stiltgrass spreads readily by its seeds. The tiny seeds are sticky and can attach themselves to the fur and hooves of animals such as deer. They can also travel by water and attach themselves to people’s clothing and shoes, where they then spread. This makes it difficult to control Japanese stiltgrass.

A single plant of Japanese Stiltgrass can produce 1,000 seeds, which can then go on and further infest the area or travel to other areas, disrupting native vegetation. These seeds are produced by both cross-fertilization and self-fertilization of the flowers. 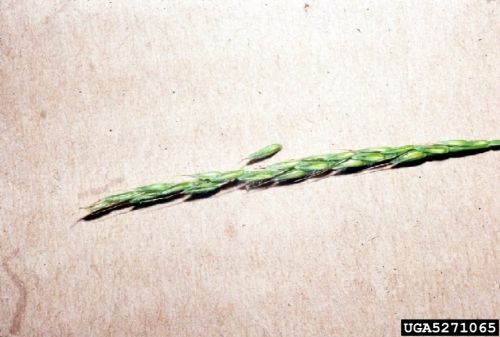 Why Is Japanese Stiltgrass Invasive?

Japanese Stiltgrass is a common plant found in Asia. It is believed that it came to the United States in 1919, when it arrived in Tennessee. It was used as packing material in crates of porcelain, and the plant rapidly began to spread across areas of the southern United States.

Japanese Stiltgrass is a problem in the United States and is considered an invasive species. It has received this designation because it replaces native vegetation found in a range of different ecosystems, from forested floodplains to stream banks to fields. It can also commonly be found as a weed in lawns and yards.

The plant is a problem because it outcompetes native or desirable vegetation, keeping them from growing in its place. The plant grows well in a variety of light conditions. From the deeply shaded hemlock forests found throughout the United States to sunny and wide open fields with little shade. Japanese Stiltgrass does prefer damp conditions. Which is why you may find it commonly in locations such as along the banks of streams.

Unfortunately, Japanese Stiltgrass spreads rapidly in disturbed areas, especially locales that are minimally mowed down. The weed spreads quickly in part due to the fact that it quickly roots where the nodes touch the ground. This makes it difficult to control Japanese stiltgrass.

When Japanese Stiltgrass invades an area, the locale ends up with decreased biodiversity. In addition, infected areas tend to have populations of other invasive plants that can further outcompete native vegetation. The decreased native wildlife habitat can provide good cover for invasive animals, such as the cotton rat, rather than providing a home for native animals. In addition, these invasive animals can further compromise the local wildlife.

Another feature that makes the Japanese Stiltgrass a problem to native grasses is that it can inhibit seed germination of other grasses, which is known as allelopathic potential. This was studied as recently as 2010 by Pisula and Meiners.

From its initial infestation in Tennessee, Japanese Stiltgrass has spread to 24 eastern states and territories. It ranges from New York state down south to Florida, extending westward to Texas. It is also found in Puerto Rico now. Within its invaded areas, it is also found with other invasive plants, such as garlic mustard (Alliaria petiolata), Japanese honeysuckle (Lonicera japonica), and Lady’s thumb (Persicaria maculosa). 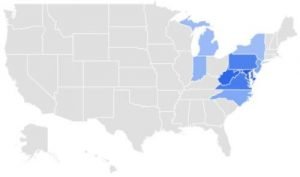 Reports of Japanese stiltgrass in the US

How to control Japanese Stiltgrass

The essence of mechanical control is removing the plant before the seeds can drop to the soil. In small areas, hand hoeing or hand pulling are often an effective means of controlling Japanese Stiltgrass infestations, such as in your yard. It cannot be over-emphasized that this needs to occur before the plant has dropped seed, which, for example, occurs in mid August in northern states such as New Jersey.

Unfortunately, when you pull the Stiltgrass or hoe the area early in the season, it disturbs the soil. This fact can stimulate the germination of new plants if there are already seeds in the ground. Such as is the case when the Japanese Stiltgrass has been growing in the area for more than a season. The time frame to watch out for this in northern states is before August, when the plant goes to seed.

Mowing regularly and constantly is not going to stop the plant from producing seeds. Instead, the Japanese Stiltgrass will simply grow to a lower height and then set seed there. If you are going to mow as your means of mechanical control, you should mow the plants directly before the flowering, such as in early August. Doing so cuts off the flowering part of the plant before the seed matures and prevents seeds from dropping into the surrounding soil.

The best way to prevent Japanese Stiltgrass from growing in your lawn is to promote and grow a healthy, dense lawn. To maintain healthy turfgrass, you can consult with your local County Extension Office. You will want to apply fertilizer and lime according to the results of a soil test, followed by selecting a type of seed that is best in both your area and for your lawn needs. Such as addressing areas of shade to full sun. Water your grass as needed to help the healthy turfgrass grow and develop.

Regular mowing is essential to maintain a healthy lawn. But regular mowing does not necessarily prevent Japanese Stiltgrass from growing. Instead, the plant typically grows to a lower height before setting seed. If the area of Japanese Stiltgrass in your lawn does set seed, you can mow the grass very low and bag the clippings. Which helps to reduce the amount of seeds that fall back into the soil. Note that if you mow your regular turfgrass too low, it can damage desirable or native vegetation. You may have to overseed to re-establish lawn cover.

If you have a large area of grass affected with Japanese Stiltgrass, the only option may be to treat the area with a herbicide. Care must be used when applying herbicides, as they can affect the healthy plants that you want to maintain. There are two major classes of herbicides to control Japanese Stiltgrass, pre-emergence and post-emergence herbicides. Some of these can be purchased at your local Big Box store, hardware store, or nursery. But others are only available to landscaping professionals.

Examples of a pre-emergence herbicide include trifluralin, which is marketed under several brand names, such as Preen Garden Weed Preventer. When you use trifluralin, you need to make sure that you do not use it in areas where ornamental flower seeds will be directly sown into the ground. As it can affect their growth. Pendimethlin is an example of a landscaping professional only product.

Post-emergence herbicides also come in several different varieties. These generally kill the grasses that you are applying it to after they have emerged from the soil. They tend to be most effective when they are applied before Japanese stiltgrass has had the chance to set seed.

Examples of post-emergence herbicides include fenoxaprop, which goes by trade names such as Bayer Crabgrass Killer for Lawns. It can be used on a variety of grasses, such as established perennial grasses, such as Kentucky bluegrass and tall fescue. While it is generally safe to use on these grasses, you should follow the directions carefully. As it can cause issues such as stunting or discoloring rapidly growing or seedling turf.

An important note about its application is that grasses it has been applied to should not be mowed for at least 24 hours before or after application. Which allows the product to penetrate into the grassy weeds. For many grasses, you should wait 21 days after application before re-seeding.

Other examples used to treat Japanese Stiltgrass include glyphosate and glufossinate, which can be used to spot treat Stiltgrass in planting beds or gardens. These should only be applied to unwanted plants as they can affect plants that you want to keep. Another example is sethoxydim, which is a selective herbicide and will not affect most non-grass ornamental plants if you follow the directions carefully. Landscape professionals can also use products such as imazapic and fexoxaprop-p-ethyl. 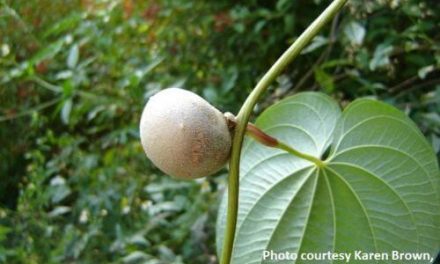 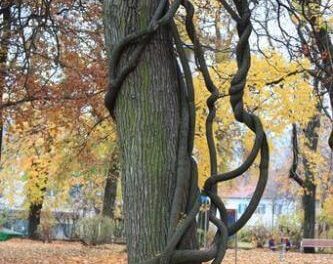 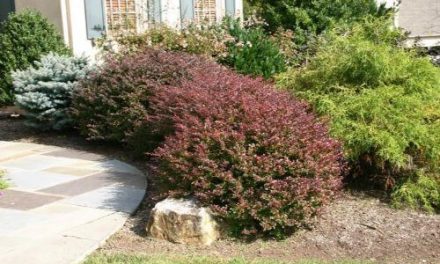 How To Get Rid of Japanese Barberry in Your Yard 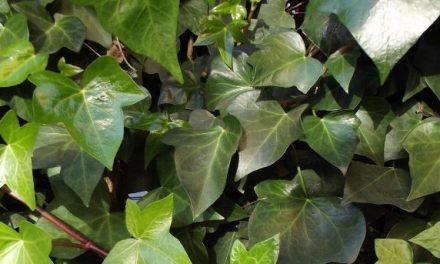 How To Get Rid Of English Ivy