How To Control Japanese Honeysuckle in Your Yard 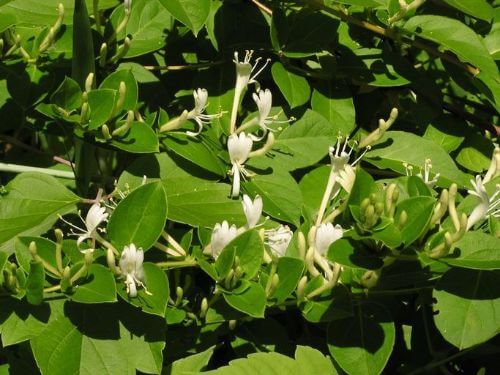 Japanese honeysuckle (Lonicera japonica) is an aggressive trailing or climbing vine. The semi-evergreen bush shows rapid growth like other invasive plants and smothers native vegetation. In this article we will talk about how to control Japanese honeysuckle in your yard.

The species thrives and flourishes well under the sun and quickly re-sprouts after contact with soil. There is a need to prevent the spread of Japanese honeysuckle due to the potential risk of overtopping, smothering and out-competing the native shrubs and trees. The invasive plant can be controlled or removed by using effective control methods at the right time.

Japanese honeysuckle (Lonicera japonica Thunb.) is a member of the Caprifoliaceae family. This invasive plant species is also known as honeysuckle, Chinese honeysuckle, woodbine, silver honeysuckle and Golden honeysuckle. The woody perennial plant is deciduous or evergreen in nature. However, the condition varies with climate change.

The white fragrant flowers bloom for a long period from summer through fall. They later produce black, berry-like fruit which is mildly toxic. The plant contains underground rhizomes, reproduction occurs by vegetative and seed propagation. Japanese honeysuckle can grow in a variety of habitats and forms a thick mat over the trees and shrubs.

Japanese honeysuckle is native to East Asia, including Japan, Korea and China. The invasive plant first arrived in North America in Long Island, NY in the early 1800s and widely cultivated in the 1860s. The widespread species was taken into account in 1904 in the eastern United States.

However, later it became troublesome due to its aggressive growth behavior and ability to invade in both disturbed and well-managed areas.

Nowadays, it can be easily seen in North America, Central America, Canada, in different parts of South America, Australia and Europe. It is now found in 26 U.S states and 92 Indiana counties. Many other states of the U.S are assessed to be under threat of infestation. The spread of Japanese honeysuckle is only limited in Africa.

Japanese honeysuckle is considered to be one of the major weed species in Australia, New Zealand, the United States and multiple countries in Europe. 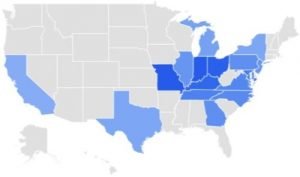 Reports of Japanese honeysuckle in the US

The invasive woody vines can grow in both open and shaded areas but prefer full sun. The plant growth is limited in northern regions due to frost which causes the death of its shoots. In the western region, inadequate precipitation suppresses plant growth. In the south, cold temperature is not sufficient to break the seed dormancy of Japanese honeysuckle.

However, this invasive plant can thrive in a variety of habitats such as open lands, disturbed lands, roadsides, canopies, waste areas, flood plains, fields, barrens, forest floors and wetlands. It grows vigorously in moist, loamy and well-drained soils, and can tolerate a range of 5.5-8 pH.

How to Identify Japanese Honeysuckle

Japanese honeysuckle is a perennial, evergreen woody vine, and can climb or trail over 80 ft. The young stem is covered with tiny soft hairs. The stem is reddish to light brown in color, hollow and up to 2 in. thick. 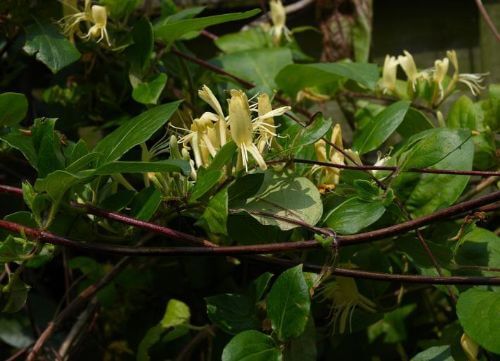 The leaves of Japanese honeysuckle are green, their shape is oval to oblong, up to 1-2 in. long, hairy, and young leaves are toothed or lobed. 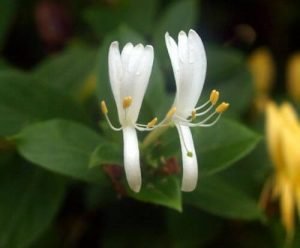 The fragrant flowers are whitish to pink in color, that changes to cream-yellow when it ages. The fruits of Japanese honeysuckle are small berries, shiny, purple-black in color when it ripens. Each berry contains 2-3 black to brown seeds. 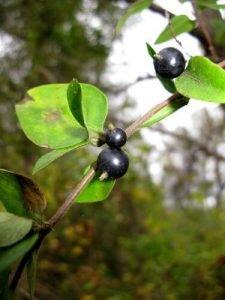 Japanese honeysuckle can reproduce by both vegetative propagation through underground roots and by seed propagation. Flowering may occur from April to July and through October. However, the blooming period can be extended from summer through fall, depending on weather conditions.

Fruits are produced in abundance on shoots in the second growth year. Although, the time can vary from place to place. It acts as a deciduous plant in the northern climate and evergreen in warmer regions. 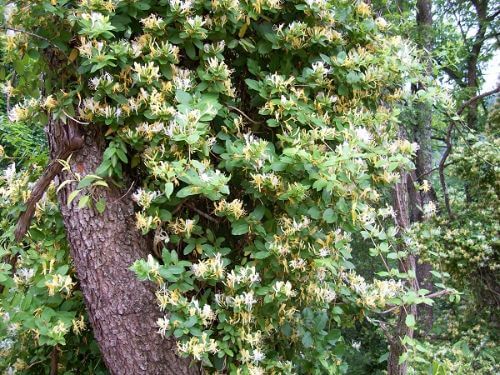 How does Japanese honeysuckle spread?

Japanese honeysuckle is famous for its rapid growth through seeds and roots. The plant can spread widely with the help of birds, water, human activity or roadside machinery.

Seeds can spread far with the help of birds. In New Zealand, song thrushes, blackbirds and silvereyes eat the fruit of the Japanese honeysuckle and drop seeds far away. This helps with the invasion in non-infested areas.

Vines can also spread through human activities like mowing and cutting. After mowing, plant parts caught in the tool can spread while transportation. However, no accidental infestation is reported through contaminated seed trade.

How to control Japanese honeysuckle

Japanese honeysuckle grows aggressively where climatic conditions are favorable. Regular monitoring and careful management strategies can be effective to control the establishment of the weed on your land.

The first step is to correctly identify the plant species. You should have an idea about the right time to employ control methods. Control methods are applied according to the level of infestation. Multiple methods are used to control Japanese honeysuckle.

The integrated management technique is considered to be the most effective, which involves the application of more than one control method to completely eradicate the plant infestation.

For small infestations or early invasion, hand pulling of entire vines can be done to suppress the plant. Manually pull the plant from the ground, including the root system and dispose of the plant material. You can also use a shovel or hoe for digging the roots. Repeated hand puling should be conducted during spring, summer or fall before fruiting. However, it is a time-consuming method and requires extra labor.

Mowing or cutting the Japanese honeysuckle for several years in early spring and late fall can help to remove it from your yard. Avoid cutting bushes in the winter, it will cause aggressive re-sprouting of plants. However, it is not a recommended method for the plant eradication because it ultimately stimulates the plant growth and forms shorter dense mats of vegetation.

Fire can be used as a control method to burn the above-ground plant vegetation in an infested area. However, burning alone will not completely remove the vines and it will reestablish in the next growing season. For best results, combine the herbicide application method with burning. The burning period should be late autumn or winter when native plants are dormant. A month later, treat Japanese honeysuckle with glyphosate for complete removal.

Repeated heavy grazing of Japanese honeysuckle will not completely remove the plant from an infested area. The method can be combined with herbicide applications for effective results.

Different fungal species have been reported which can be used to control Japanese honeysuckle. Two insect species named Cladosporium lonicericola and Appendiculella lonicerae can also be helpful as biocontrol agents to eradicate the invasive plants.

A chemical method is the most effective way to eradicate the infestation of Japanese honeysuckle from your yard. The time and method of herbicide application can significantly affect the end results. Read the labels and instructions of each herbicide before their application to get productive outcomes.

Foliar application of 3-5% triclopyr or 1.5-3% glyphosate shortly after the first frost can effectively control Japanese honeysuckle. The cut stump method can also be used during the growing season. In this technique, adequate concentrations of herbicides are applied after cutting the above-ground parts of the weed. Monitor the site for several growing seasons to prevent resprouts of Japanese honeysuckle in your yard.

A combination of dichlorprop and 2,4-D can be sprayed within 2 days of first frost (possibly in October). This treatment of herbicide will control up to 94% of weed from an infested site but the effectiveness of herbicide will be decreased by delaying its application time.

The treatment of picloram and 2,4-D (1:4) can effectively reduce the infestation of Japanese honeysuckle in one year. The second treatment of Tordon 101® will decrease the weed foliage up to 90%.

Sulfometuron application is effective in February. The herbicide is applied in combination with surfactant which can eradicate up to 99%. 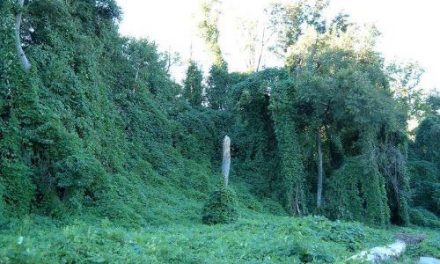 How To Get Rid of Kudzu in Your Yard 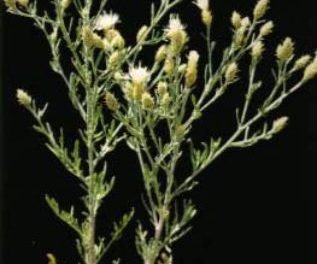 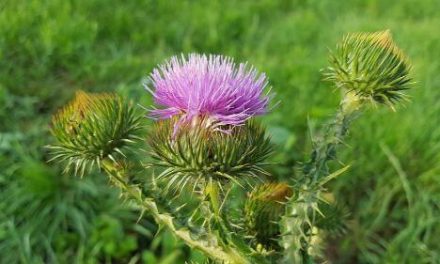 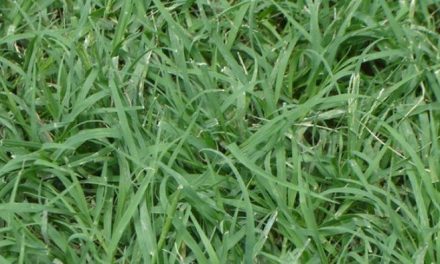 How To Get Rid of Quackgrass